DBAddin is an MS Excel Addin for retrieving Database data via userdefined functions into Excel and writing Data (DBMapper), executing generic DML (DBAction) and doing all this in Sequences (DBSequence).

There are three ways to query data with DBAddin:

All these functions insert the queried data outside their calling cell context, which means that the target ranges can be put anywhere in the workbook (even outside of the workbook).

Additionally, some helper functions are available: 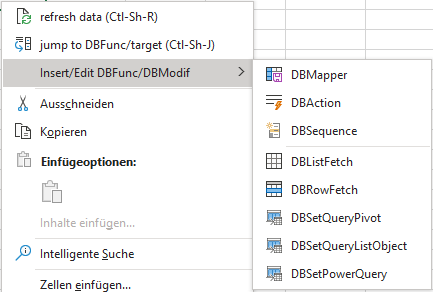 The select statement for querying the values is given as a text string in parameter “Query”. This text string can be a dynamic formula, i.e. parameters are easily given by concatenating the query together from other cells, e.g. "select * from TestTable where TestID = "&A1

The query parameter can also be a Range, which means that the Query itself is taken as a concatenation of all cells comprising that Range, separating the single cells with blanks. This is useful to avoid the problems associated with packing a large (parameterized) Query in one cell, leading to “Formula is too long” errors. German readers might be interested in XLimits, describing lots (if not all) the limits Excel faces.

The returned list values are written into the Range denoted by “TargetRange”. This can be

There is an additional FormulaRange that can be specified to fill “associated” formulas (can be put anywhere (even in other workbooks), though it only allowed outside of the data area). This FormulaRange can be

with formulas usually referring to cell-values fetched within the data area. All Formulas contained in this area are filled down to the bottom row of the TargetRange. In case the FormulaRange starts lower than the topmost row of TargetRange, then any formulas above are left untouched (e.g. enabling possibly different calculations from the rest of the data). If the FormulaRange starts above the TargetRange, then an error is given and no formulas are being refreshed down. If a FormulaRange is assigned within the data area, an error is given as well.

The next parameter “ExtendDataArea” defines how DBListFetch should behave when the queried data extends or shortens:

The parameter headerInfo defines whether Field Headers should be displayed (TRUE) in the returned list or not (FALSE = Default).

The parameter AutoFit defines whether Rows and Columns should be autofitted to the data content (TRUE) or not (FALSE = Default). There is an issue with multiple autofitted target ranges below each other, here the autofitting is not predictable (due to the unpredictable nature of the calculation order), resulting in not fitted columns sometimes.

The parameter AutoFormat defines whether the first data row’s format information should be autofilled down to be reflected in all rows (TRUE) or not (FALSE = Default).

The parameter ShowRowNums defines whether Row numbers should be displayed in the first column (TRUE) or not (FALSE = Default).

This works around the issue with displaying GUID columns in SQL-Server.

would insert the first returned field (job_desc) of the given query into A1, then min_lvl, max_lvl into A8 and A9 and finally job_id into C8.

The optional headerInfo parameter (after the query and the connection string) defines, whether field headers should be filled into the target areas before data is being filled.
For example:

The orientation of the filled rows is always determined by the first range within the TargetRange parameter array: if this range has more columns than rows, data is filled by rows, else data is filled by columns.
For example:

would fill the same data as above (including a header), however column-wise. Typically this first range is used as a header range in conjunction with the headerInfo parameter.

Beware that filling of data is much slower than with DBlistFetch, so use DBRowFetch only with smaller data-sets.

Stores a query into an Object defined in TargetRange (an embedded MS Query/Listobject, Pivot table, etc.)

chainCells “chains” the values in the given range together by using “,” as separator. It’s use is mainly to facilitate the creation of the select field clause in the Query parameter, e.g.

concatCells concatenates the values in the given range together. It’s use is mainly to facilitate the building of very long and complex queries:

Where cells E1:E4 contain the constituents of the query respectively.

concatCellsSep does the same as concatCells, however inserting a separator between the concatenated values. It’s use is the building of long and complex queries, too:

Where cells E1:E4 contain the constituents of the query respectively.

All three concatenation functions (chainCells, concatCells and concatCellsSep) work with matrix conditionals, i.e. matrix functions of the form: {=chainCells(IF(C2:C65535="Value";A2:A65535;""))} that only chain/concat values from column A if the respective cell in column C contains “Value”.

Both concatCells and concatCellsSep have a “Text” sibling that essentially does the same, except that it concats the displayed Values, not the true Values. So if you want to concatenate what you see, then concatCellsText and concatCellsSepText are the functions you need.

This builds a Database compliant string (quoted) from the open ended parameter list given in the argument. This can also be used to easily build wildcards into the String, like

When E1 contains “test”, this results in ‘_test%’, thus matching in a like clause the strings ‘stestString’, ‘atestAnotherString’, etc.

An Example is give below:

There are some options to modify

of DB functions data area within a Workbook.

You can set these options in Excel’s Custom Properties (Menu File/Properties, Tab “Customize”):

To disable refreshing of DBFunctions when opening the workbook create a boolean custom property “DBFSkip” set to “Yes” (set to “No” to disable skipping).

Prevent Storing of retrieved Data in the Workbook

To prevent storing of the contents of a DBListFetch or DBRowFetch when saving the workbook create a boolean custom property “DBFCC(DBFunctionSheet!DBFunctionAddress)” set to “Yes” (set to “No” to reenable storing). This clears the data area of the respective DB function before storing and refreshes it afterwards (Note: If the custom property “DBFSkip” is set to “Yes”, then this refreshing is skipped like when opening the Workbook)

Example: The boolean custom property “DBFCCTable1!A1” would clear the contents of the data area for the DBFunction entered in Table1, cell “A1”.

To prevent storing of the contents for all DBFunctions create a boolean Custom Property “DBFCC*” set to “Yes”.

Excel however doesn’t fill only contents when filling the data area, there’s also formatting being filled along, which takes notable amounts of space (and saving time) in a workbook. So to really have a small/quick saving workbook, create a boolean custom property “DBFCA(DBFunctionSheet!DBFunctionAddress)” set to “Yes” (set to “No” to reenable storing). This clears everything in the the data area of the res

Example: The boolean custom property “DBFCATable1!A1” would clear everything from the data area for the DBFunction entered in Table1, cell “A1”.

To prevent storing of everything (incl. formats) for all DBFunctions create a boolean Custom Property “DBFCA*” set to “Yes”.

There are two possibilities of connection strings: ODBC or OLEDB. ODBC hast the advantage to seamlessly work with MS-Query, native OLEDB is said to be faster and more reliable (there is also a generic OLEDB over ODBC by Microsoft, which emulates OLEDB if you have just a native ODBC driver available).

Additionally the connection timeout (CnnTimeout, which can’t be given in the functions) is also defined in the DBAddin settings.

To easen the distribution of complex DB functions (especially queries), there is a config file mechanism in DBAddin: DB function (actually any Excel formula) configurations can be created in config files having extension XCL and are displayed with a tree-dropdown menu below “DB Configs” that displays the file hierarchy beneath ConfigStoreFolder for easy retrieval of the configs.

The layout of these files is a pairwise, tab separated instruction where to fill (first element) Excel formulas (starting with “=” and being in R1C1 representation) or values (second element). Values are simple literal values to be inserted into Excel (numbers, strings, dates (should be interpretable by Excel !)), formulas are best taken from the return of ActiveCell.FormulaR1C1 !

There is a helping script (“createTableViewConfigs.vbs”) to create a DBListFetch with a “select TOP 10000 * from …” for all tables and views in a given database (In order for that script to work, the ADO driver has to support the “OpenSchema” method of the connection object). The working of that script is quite simple: It takes the name of the folder it is located in, derives from that the database name by excluding the first character and opens the schema information of that database to retrieve all view and table names from that. These names are used to build the config files (XCL).

Other users can simply look up those config files with the hierarchical menu “DBConfigs”, which is showing all config files under the ConfigStoreFolder (set in the global settings). Using folders, you can build categorizations of any depth here.

If you add the (sub) foldername to “specialConfigStoreFolders” (colon separated list) then this subfolder is regarded as needing special grouping of object names. The separator (“_” or similar) can be given in “(pathName)Separator”, where (pathName) denotes the path name used above in “specialConfigStoreFolders”. If this is not given then CamelCase is assumed to be the separating criterion.

The maximum depth of the sub menus can be stated in “(pathName)MaxDepth”, which denotes the depth of hierarchies below the uppermost in the (pathName) folder (default value is 10000, so practically infinite depth).

You can add another hierarchy layer by setting “(pathName)FirstLetterLevel” to “True”, which adds the first letter as the top level hierarchy.

If the user retrieves the relevant configuration, a warning is shown and then the configured cells are entered into the active workbook as defined in the config, relative to the current selection.

Cells in other worksheets are also filled, these are also taking the reference relative to the current selection. If the worksheet doesn’t exist it is created.

There are no checks (except for Excels sheet boundaries) especially whether any cells are overwritten !

If the setting ConfigSelect (or any other ConfigSelect, see Settings continued is found in the settings, then the query template given there (e.g. SELECT TOP 10 * FROM !Table!) is used instead of the standard config (currently SELECT TOP 10000 * FROM <Table>) when inserting cell configurations. The respective Table is being replaced into !Table!.

To save time when starting up DBAddin/Excel, refreshing the config tree is only done when you open the Config Menu and click “refresh DB Config Tree”.

You can create the three DB Functions by using the cell context menu:

The DB functions are created with an empty query string and full feature settings (e.g. Headers displayed, autosize and autoformat switched on) and target cells directly below the current active cell (except DBSetQuery for ListObjects, the ListObjects are placed to the right).

Below the results for a DB Function created in Cell A1:

DBSetQuery also creates the target Object (a Pivot Table or a ListObject) below resp. to the right of the DB Function, so it is easier to start with. In case you want to insert DB Configurations (see Cell Config Deployment), just place the selection on the inserted DB function cell and select your config, the stored query will replace the empty query in the created DB function.

Following Settings in DBAddin.xll.config or the referred DBAddinCentral.config affect the behaviour of DB functions: